The recently issued Report on the Voluntary Disclosure Program by The Offshore Compliance Advisory Committee concluded that the program ("VDP") "could be made more effective and more fair" by providing less generous relief in certain circumstances. It is somewhat surprising that the Committee paid little or no attention to the following.

"We have reviewed the voluntary disclosure program (VDP) and no changes are forthcoming. The VDP is a very successful program that encourages taxpayers to correct their tax information and avoid being penalized and prosecuted" 1

2. In 2010 , the then Minister of National Revenue, Keith Ashfield, stated:

“In fact, because more and more people are coming forward to declare their offshore assets, we are recovering far more in tax revenue than if the CRA went looking for this money. Rather than reviewing piles of documents, chasing anonymous leads and spending weeks in court proceedings; Canadian taxpayers are now coming to the CRA directly to clear their conscience…they are coming forward to declare their assets in numbers never seen before" 2

3. The 2013 Fall Report of the Auditor General of Canada observed that "In the years after the Agency received the Liechtenstein list, (data regarding Canadians with accounts at the LGT Bank received in 2007), the number of voluntary disclosures increased dramatically". The following graph tracks the increase from 2003-2004 to 2013-2014 3 : 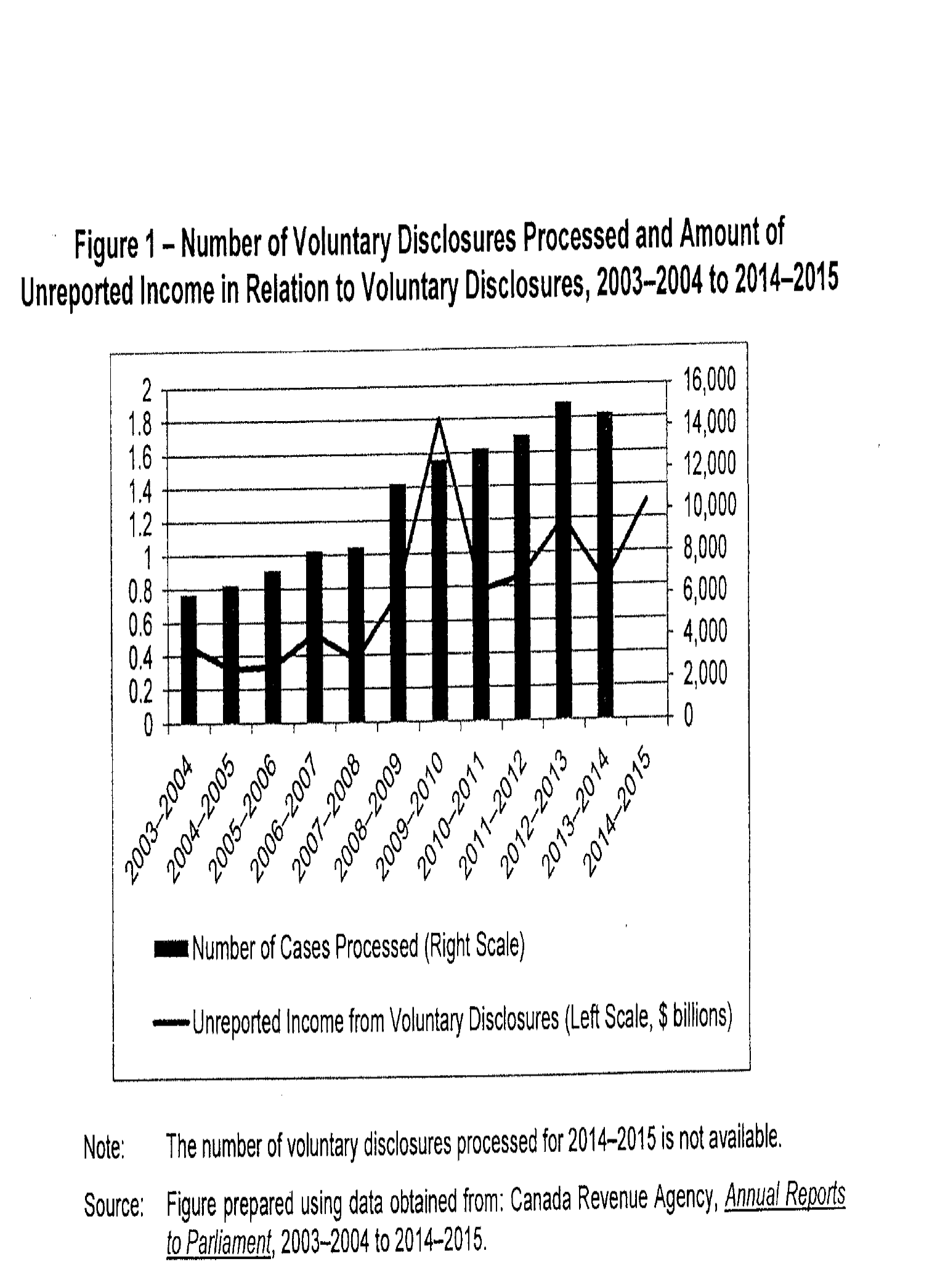 4. The CRA Annual Report to Parliament, 2014-2015, indicates that the increase has continued unabated:

By way of comparison, a total of 55,800 taxpayers made disclosures under U.S. Offshore Voluntary Disclosure Program4.

6. The CRA Annual Report to Parliament, 2014-2015 also noted that "(T)he number of disclosures and the amount of undeclared disclosures,  in part due to continued international efforts to share tax data, made up most of the increase (in unreported income from offshore disclosures.)".  Canada and Switzerland have agreed to share tax data beginning in 2017 with the first transmission of data in 2018. It is reasonable to expect that the number of disclosures after 2017 will decrease dramatically to   well below pre- Liechtenstein list levels (assuming that a substantial number of the pre-Liechtenstien list disclosures related to offshore accounts)

7. Based on personal knowledge of data gleaned from hundreds of VDP submissions, it is reasonable to assume that data available to the CRA indicates that the vast majority of taxpayers who have availed themselves of the program are golden-agers or heirs who have inherited accounts from golden-agers. The data should also indicate that most of the accounts were opened more than 10 years prior to the submission and that no material fresh deposits were made in the 10 year period. It is highly unlikely that non-compliance by golden-agers was encouraged by the VDP.

8. A condition for relief under the US Streamlined Foreign Offshore Procedures is that the failure to report income and submit required information returns be attributable to "non-wilful conduct" which Form 14653 defines as "conduct that is due to negligence, inadvertence, or mistake or conduct that is the result of a good faith misunderstanding of the requirements of the law."  Form 16453 also requires taxpayers to provide specific reasons for the failure, and to "(I)nclude the whole story including favorable and unfavorable facts." The Advisory Committee recommends that there be reduced relief where there is "deliberate or wilful default or carelessness amounting to gross negligence". In order to make a determination, a CRA auditor would require "the whole story" in all disclosures. Determining whether there is deliberate or wilful default on the basis of an unsubstantiated, self-serving and often ghost-written story is impossible to do on a reasoned basis. (The U.S. Department of Justice is reviewing whether taxpayers may have submitted false "non-wilful" certifications 5.

9. S220(3.1) is only the basis for granting relief for interest and one of bases for relieving absolute liability penalties.  It is S152(4) which gives the Minister the discretion to make  an assessment, reassessment or additional assessment of tax for a taxation year which is at the core of the VDP.  The cost of a disclosure is determined primarily by which years are assessed (there is no tax and no interest where there is no assessment) The CRA Voluntary Disclosures Program (VDP) Operations Manual effectively removes the element of discretion by implicitly limiting the years to be reassessed to the years for which banks are required by the laws governing them to retain documents, irrespective of deliberate or wilful default.

10. The 2014-2015 CRA Annual Report to Parliament 2014-2015 states that the percentage of files completed vs. the intake of voluntary disclosures submissions was 95% in 2014-2015. If the exercise of discretion will be required to determine whether relief should be reduced, the completion percentage will be significantly lower.

The Committee concluded that the VDP “could be made more effective and more fair” if the yardsticks for effectiveness are the number of non-compliant taxpayers brought into compliance and the cost of doing so, the VDP rates an A+. With respect to fairness, the answer is that the horse is already out of the barn; the number of voluntary disclosures will decrease dramatically commencing in 2018.

Diane Lebouthillier’s comments on the Committee report are contained in a press release dated December 8, 2016.

“Minister (of National Revenue) Lebouthillier welcomed the overall tightening of the VDP to ensure fairness of the tax system, notably in order to limit the repeated use of this program by sophisticated taxpayers who wish to minimize what they owe and restrict the circumstances in which they can be used. The Minister and the CRA will leverage the OCAAC’s recommendations to review the VDP parameters. Changes will be communicated in late 2017.”

Since the VDP already prohibits repeated use and since the number of disclosures will decline dramatically after 2017, the statement is an acknowledgement that the fairness of the program is quickly losing its legs as a political issue. It is expected that any fix will be cosmetic in nature.